Combatting climate change requires action from all of us. That’s why we’re proud to be joining other leading organizations in signing the CIO Strategy Council’s Sustainable IT Pledge. At CloudOps, we’re committing to reducing the environmental impact of our IT operations and use of digital technology, helping deliver a net-zero future..

The effects of cloud computing on climate change are complex. Data centres consume energy and emit greenhouse gases in the process. The information and communications technology industry is projected to take 30% of the global demand for energy by 2030. Currently consuming 7% of the world’s energy supply, internet technology has the same carbon footprint as the aviation industry.

The source of 7% of the global energy demand will not make or break the fight against climate change. This has been hammered home recently as people stayed home to fight the spread of COVID-19. Never has the need to binge-watch Netflix been so critical for those fortunate enough to have a subscription. Yet the plummeting transportation and industry production has led to the lowest carbon emissions in years. The point: fighting climate change requires an “all of society” approach.

“All of society” includes the emissions of cloud technology, making criticisms of cloud’s carbon footprint valid but reducing the footprint of cloud alone will not stop climate change.

Let’s address the cloud’s carbon footprint. Some providers are more environmentally friendly than others. At CloudOps, we largely rely on the hydro-powered grid in Quebec, giving us a low carbon footprint which has attracted eco-conscious partners like the Woods Hole Research Center.

Microsoft has heavily committed to being carbon negative by 2030, sequestering more CO2 than they produce. Google has matched each kilowatt-hour of non-renewable energy used by its data centers with the purchase of a kilowatt-hour of renewable energy, something it achieved in 2018. The reliance on purchased energy to offset emissions is controversial, but the scale at which Google has implemented this policy, along with investment in new renewable capacity, makes Google’s environmental contributions significant. Apple has significantly invested – 83% of their energy consumption coming from renewables.

IBM has committed to 55% reliance on renewable energy by 2025, claiming that 38% of its energy consumption already came from renewables in 2018. Alibaba Cloud unfortunately still relies heavily on the coal-powered grid in China. Amazon’s AWS is making progress to distance itself from its coal-powered days and have installed several solar and wind power plants around the world, but still has ways to go as it rapidly expands its operations in Northern Virginia, the “data center capital of the world,” with no investment or planned investment in renewables there since 2016. Microsoft and Facebook have also increased their operations in North Virginia, but have increased their consumption of renewable energy there. Apple has completely switched to renewable energy for its North Virginia data centers. In fact North Virginia (where only 4% of energy production is from renewables and approximately 40% of new cloud infrastructure was developed in 2018) is one of the largest sources of carbon emissions from cloud computing in the world.

However, let’s remember that even if 100% of North Virginia’s cloud infrastructure was powered by renewables, climate change would not be averted. And that overall, cloud companies invest a disproportionately large amount in renewable energy compared to many other sectors of industry. Part of me thinks “anti-climate change” arguments on cloud computing benefit oil and gas production, as people believe environmentalists want to shut down YouTube. As I know many environmental scientists, I assure you this is not the case. The major goal is and must remain to transition our energy consumption across all sectors away from fossil fuels.

But how do we do that? It’s worth considering the diversity of options here. A great resource here is Project Drawdown. The Drawdown review compiles climate solutions to propose how to reduce the atmospheric level of greenhouse gases. It focuses on 3 main areas: reducing emissions, supporting carbon sinks, and improving society.

Drawdown shows that along with expanding renewable energy production, a few other areas are important. Improving the storage and disposal of chemical refrigerants, which are extremely potent greenhouse gases, will be important as their use expands. Eating protein lower on the food chain by replacing or reducing the consumption of meat, particularly beef, will prevent natural carbon sinks from being converted to farmland. Per calorie, meatless diets are much more environmentally friendly. Even natural, grass-fed beef is not a climate solution, nor can it deal with today’s meat demand. Particularly in Brazil, when tropical rainforest is cleared to raise cattle the climate and biological impacts are devastating. In the USA, the area is immense. 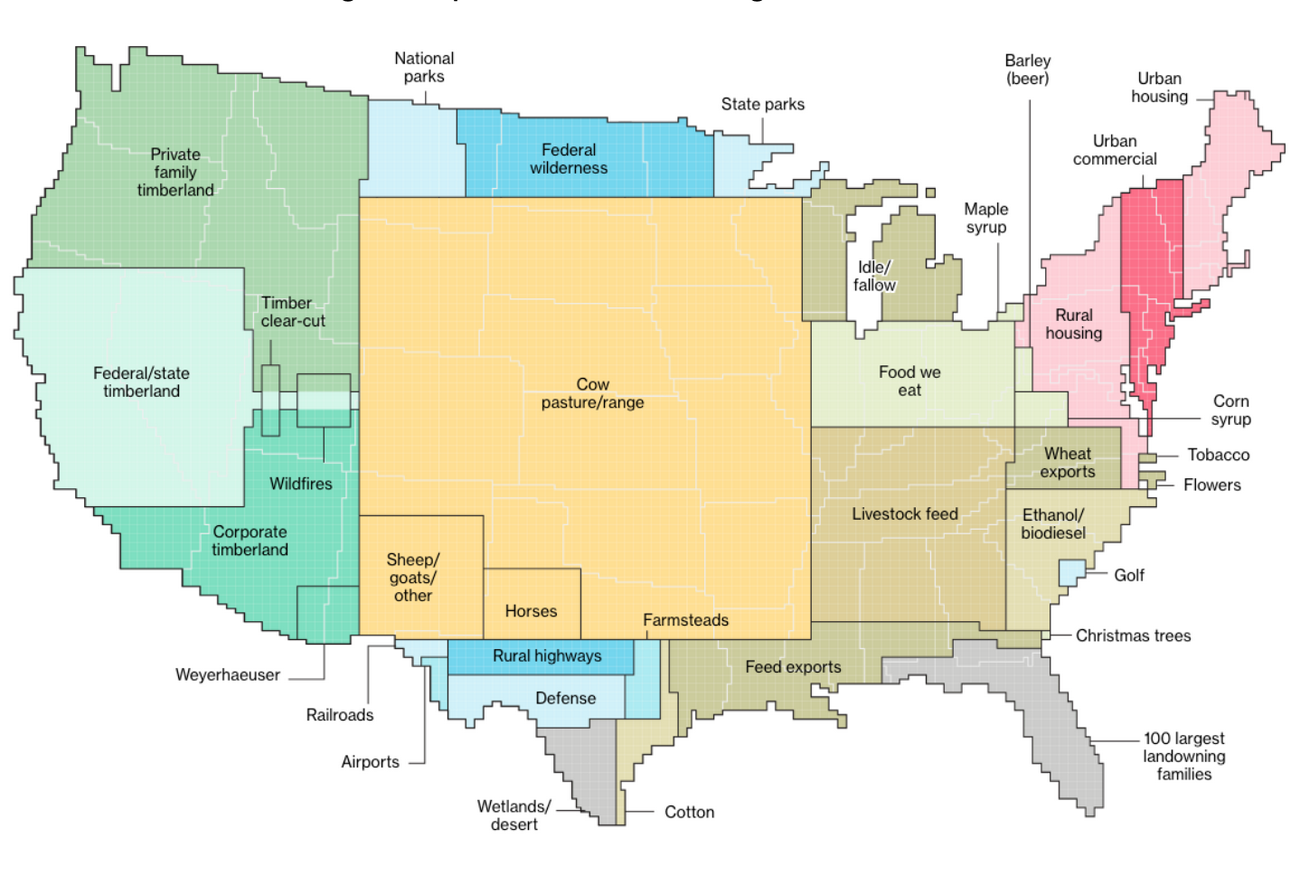 The proportion of land use by different sectors in the USA shown as continuous blocks of land. Just look at how much is used to raise cattle and produce livestock feed. From Bloomberg 2018.

However, the cloud may come to the rescue here, as many modern energy technologies will incorporate some aspect of the cloud/IoT. The security and privacy concerned with next-generation smart grids are similar to the internet. And, just like the internet, an early definition of its ethical use is needed.

The ability to transport and distribute energy over long distances is critical for fighting climate change at this stage of our technological capabilities. Renewables can be generated across time zones. Energy markets can be opened for small players to make money, as their energy production can be sold at peak hours in distant regions. And the cloud will be there, keeping it all running.

Tristan is an evolutionary biologist interested in the effects of landscape levels on genetic and phenotypic variation. He works in Vancouver Island on threespine stickleback and in the Lake Victoria basin on Nile perch and haplochromine cichlids. His work on stickleback uses remote sensing to quantify environments to test the predictability of evolution.