From the first day I started working as the office manager at CloudOps it felt like I was working from home all the time because that’s what CloudOps became to me; my second home. I immediately became friends with everybody at work. I felt welcomed with open arms and supported. People would ask me how my first week was going. Eventually, as time passed, people began to ask me how they could support me or if they could help me with something, especially when they saw me struggling to reach the top shelves in the kitchen (I’m four feet and eleven inches tall). For over a year now, I’ve considered CloudOps my second home and its people, my family, or as I call them “my office children”. They always made me feel needed and truly appreciated. Everything was going great, my job fit me like a glove, and I was happy to always feel needed.

Then one day the Coronavirus started making headlines. The thought became louder in my head. What if we have to shut down the office, I would think. In addition to that thought, there was also the fact that I wasn’t born and raised in Canada. I was born and raised somewhere else where the ideas and societal norms around work (and pretty much everything else) are different. While I struggled constantly to get rid of those archaic ideas from my life B.C. (before Canada), I couldn’t shake from my head the idea that was ingrained in me so long ago: In a time of crisis, I’ll be the first to go. Luckily, at CloudOps we have a very cohesive culture. We rally around in support of one another in times of crisis and we can speak freely if we have concerns. So I spoke to my managers. I expressed my concerns and asked that if I had to be let go, to please tell me in advance so that I could be prepared and make all necessary arrangements.

The response was that I wasn’t going anywhere. There were other things for me to do and to help with. I was going to work from home for the time being till the coronavirus crisis passed and they said my job was safe. This was going to be a wonderful new experience for me to learn what it was like to work from home and to explore and use other skills and talents to support different teams. And so the day came and I started working remotely. It’s not as fun as being at the office with all my office children but it’s not a bad experience at all because of the new things I’m doing. I realized that office management is not the only thing I’m good at. As a matter of fact, I learned a new aspect of my job: office management is not limited only to a physical office. I have to buy stuff such as monitors for the office children so they can work from home better, I have to keep the assets inventory up to date, there are documents that need to be sorted out online and more.

The most important thing I learned in the midst of this crisis is, though, that when I thought my team couldn’t be any more supportive, they surprised me once again by outdoing themselves. I realize that not everybody is as lucky as I am to work with a team that shows that level of support, especially in moments as dire as this pandemic. Having said that, I would encourage you, the reader, to be as supportive as you can be to your colleagues. Whether you are an employer or an employee, try to be a rainbow in someone’s cloud. That has been and continues to be my experience at CloudOps. Together (via Zoom and other stuff to keep social distancing) we are weathering this crisis and we’ll come out of it even stronger. 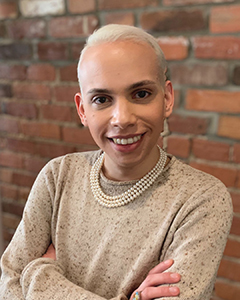 Ariel Zolezzi is the Office Manager at CloudOps who works hard keeping the team happy and healthy. She is a non-binary spirit who’s been having a human experience since the early 90s. Some of her hobbies include long walks around the city of Montreal, exploring her spiritual side and watching old Hollywood movies with her cats.