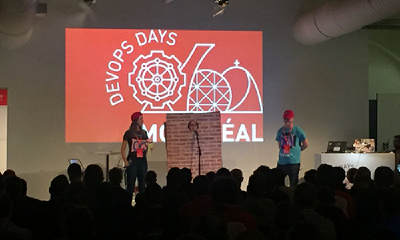 CloudOps was pleased to sponsor DevOpsDays Montreal, which took place on October 10th and 11th. Featuring a wide range of speakers and activities, the event brought together DevOps practitioners throughout Montreal.

The event kicked off in the morning with a keynote by Alistair Croll entitled ‘Innovation, Disruption, and Discontinuity: Technology isn’t Interesting.’ Innovation has traditionally continued or disrupted markets, but adaptivity is becoming increasingly necessary as we move away from economies of scale. Such adaptivity requires overcoming the conflict of interest between Dev trying to push change and Ops trying to maintain predictability.

Following Alistair, Catherine Proulx delivered a talk called ‘Shaky to Solid: a Test-based approach to Legacy Code.’ Legacy code must be maintained in many organizations, and having it efficiently tested can make it that much easier.

Jason Yee discussed a critical problem within the tech industry, that of employee burnout. His talk, ‘Burnout: Community Problem and Community Solution,’ addressed the importance of community support to prevent burnout.

James Shubin showcased ‘Next Generation Mgmt: the language’, an automation configuration management tool that he developed himself. This open source solution differs from other tools in that it offers parallel execution and distributed topology and is event-driven.

Lenore Adam discussed ‘Evolve your CI/CD Practices from Controlled Rollouts to Controlled Experiments.’ Her talk emphasised how a streamlined CI/CD pipeline forms is essential for the success of any DevOps practice. 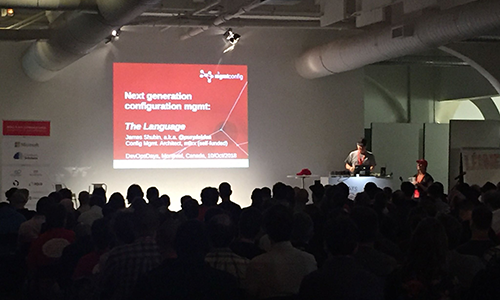 Daniel Koffler’s keynote talk called ‘DevOps in a CyberPhysical World’ reviewed the massive effects of technology on manufacturing. It considered how DevOps practices could pioneer the next industrial revolution.

Adam Hooper presented how ‘Everything I need to know, I learned in Tanzania.’ Adam spent time living in Tanzania, where he helped provide the IT necessary for the distribution of a magazine that informs readers about key local issues.

In ‘Implementing DevOps in an International Multi-cultural and Multi-geography Environment’, Jesse Hurkens shared what he learned bringing DevOps to his organization. It is ultimately about more than just reducing silos between development and operations, requiring collaborative mindsets. 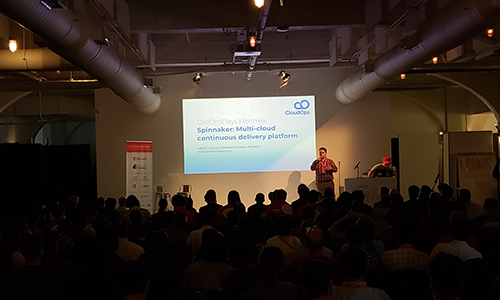 DevOpsDays also featured a series of Ignite talks, which included one by CloudOps’ very own Adrian Todorov. He presented ‘Spinnaker: a multi-cloud continuous delivery platform’. Spinnaker can help automate your pipelines as well as complement Jenkins and other CI tools. Adrian demonstrated different ways that Spinnaker can be deployed. Read Adrian’s slide deck to learn more.

The extent of talks delivered was supplemented by time for Open Spaces. The community nominated and then elected topics of interest and then divided themselves into smaller rooms for discussion. Some of the topics included ways that DevOps culture can be encouraged as well as how DevOps can happen without containers. The Open Spaces coincided with an Ansible workshop, which demonstrated substantial interest.