There has been a remarkable increase in serverless computing platforms over the past few years. While few production-ready solutions have been released, the ecosystem has nonetheless matured substantially. You may even have some immediate use cases in your environment or pipeline to consider for a serverless deployment.

Serverless architecture allows web application logic to be processed independently of physical servers, virtual machines, containers, or operating systems. It frees the entity owning the computing system from the obligation to purchase, rent, or obtain servers or virtual machines for the back-end code to run on. Only the processes and code are implicated, and the functions needed from a provider can be selected, mixed, and matched accordingly. Its applications depend primarily on BaaS (Backend as a Service) or on FaaS (Function as a Service). BaaS refers to API providers and services that can be either in-house or external while FaaS can be described as custom code, tailored to suit any need. Serverless allows you to deploy code and utilize resources in a similar way to which you would deploy a PaaS (Platform as a Service) database, load balancer, or any other PaaS service. Software development is made easier by this flexibility as well as by the space created by the undifferentiated server-side logic and state managed by cloud providers. Serverless computing resources are dynamically scaled to meet actual consumption requirements without the user’s involvement or concern towards physical servers, virtual machines, or containers. The diagram below illustrates the respective responsibility involved. 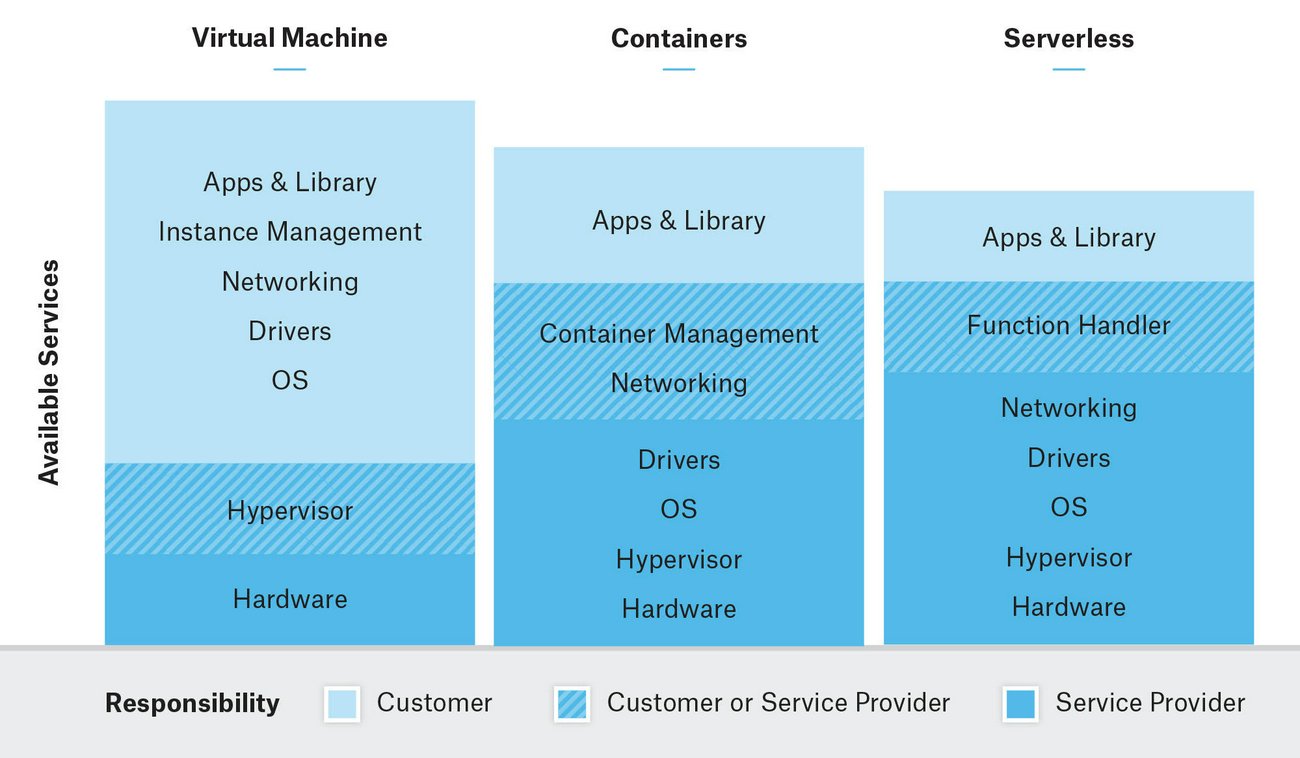 Different forms of PaaS will offer varying levels of flexibility in infrastructure. As a remote example of specialized PaaS, BaaS (Backend-as-a-Service) originally grew popular with mobile application developers and, more recently, with web developers seeking a packaged backend cloud service providing essential functions such as data storage, push notification services, user state, and integration with social media. These services can be reused as a microservice in most types of client-server applications. BaaS has become commonplace, even outside mobile development, with the recent emergence of SPAs (single-page applications) and related architectures. Its architecture resembles mobile, but targets desktops, emails, and browsers.

As a form of PaaS, BaaS could be better understood within the context of mobile applications than serverless architecture, which can better be explained as FaaS (Function(s)-as-a-Service). With FaaS, one can develop, run, and maintain certain specific application functionalities in the cloud while reducing dependency on platform services management, system management, scaling policies, and other traditional administrative and DevOps responsibilities. While BaaS provides a well-defined set of rules and inputs with known responses, FaaS gives you the means to tie anything you choose together, including BaaS for example. FaaS is perhaps the equivalent of a buffet-style restaurant, while PaaS offers a fixed menu. FaaS allows the full extent of flexibility suggested by serverless architecture.

When to Use Serverless Architecture?

What are the Main Drawbacks of Serverless Computing?

While the name ‘serverless’ may be somewhat ironic since servers are obviously involved, serverless computing is nonetheless exciting as it allows one to break down the code and simplify the complexity of non-monolithic applications. It offers a cloud computing environment with near-instant resources allocated based on usage. It reduces time-to-market by handling the orchestration overhead and, when used for the correct use cases, may provide remarkable cost savings. Serverless architecture perhaps provides the purest form of cloud computing enabling customers to get exactly what they need when needed. If you have any questions or would like one of our experts to perform an architecture assessment, please do not hesitate to contact us.

Donald is a technologically promiscuous janitor (aka Solutions Architect) with an overactive interest in data, practical technology applications, and their effects on human behaviour and interactions as they continue to change due to new technologies and communication mediums. Donald has worked on projects ranging from performance analysis, application assessments, data analysis, and architectural design, and has explained the ins and outs of various technologies to clients.